Friday, 16 June 2017 - At 166.3 kilometres, stage 7 in the Tour de Suisse is a prolonged preparation for the closing climb. The route travels from Zernez to the Tiefenbachferner in the mountains high above Sölden, Austria. To arrive at the finish the riders have to climb 14.2 kilometres at an average gradient of 9.5%. This is the Queen Stage.

In last two editions of the Tour de Suisse, Thibaut Pinot (2015) and Tejay van Garderen (2016) climbed to victory on the Rettenbachferner.

Stage 7 leaves from Zernez, located in Engadin, which is a long and high Alpine valley. The start is at an altitude of 1,463 metres and in some 100 kilometres the riders descent to 700 metres. Following a more or less flat intermezzo of 15 kilometres the roads begin to rise and they will do so for the last 52 kilometres.

At first it’s a gentle inclination – a false flat. The riders enter the Ötztal to follow the river Ötztaler Ache upstream. Passing through the villages Au and Längenfeld the route turns right in Sölden to hit the Gletscherstrasse. This is the beginning of the closing climb. First it goes to the Rettenbachferner – 12.1 kilometres at 10.8% -, but instead of turning right to power to the finish line the route goes right for 3 more kilometres at 6%.

Two intermediate sprints – at kilometre 136.1 and at kilometre 1502 – come with time bonuses of 3, 2 and 1 seconds each, while the first three riders on the line at the Tiefenbachferner take 10, 6 and 4 seconds. 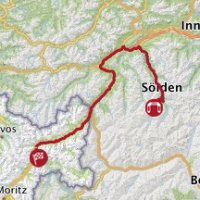