Thursday, 10 August 2017 - The route of the 4th stage of the BinckBank Tour travels on gently rolling roads. Start and finish are in Lanaken, while the distance amounts to 154.2 kilometres.

The route takes in different laps in the vicinity of Lanaken. Stage 6 of last year’s Eneco Tour was partly played out on the same roads – yet, that route took in a section in Wallonia, which means it was a lot hillier. Today the riders don’t leave Limburg, which is the easternmost part of Flanders.

The first lap amounts to 46.4 kilometres, while the second one is almost the same, although slightly longer, namely 53.2 kilometres. Subsequently, the last two rounds are identical at 27.3 kilometres. The province of Limburg is marked by gentle slopes and that’s exactly what stage 4 in the BinckBank Tour has to offer.

The first two rounds take in Riemst, where Giro-winner Tom Dumoulin lives, while Mathew Hayman, victor of the 2016 edition of Paris-Roubaix, resides in Lanaken.

The Golden Kilometre begins at kilometre 121.3, giving riders the opportunity take to three time bonuses of 3, 2 and 1 seconds each within 1 kilometre. The first three riders on the line win 10, 6 and 4 seconds. 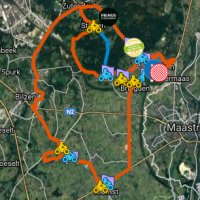