Sunday, 3 September 2017 - At 129.4 kilometres, stage 15 in the Vuelta a España is a short and challenging endeavour. The riders face 3,305 vertical metres, while the finish is atop Alto Hoya de la Mora after climbing for 28.4 kilometres.

Following a start on rolling roads and a descent the riders arrive in Pinos Puente. From there, the road is a false flat in the direction of Granada, getting steeper until a short drop at kilometre 6 runs down to the foot of the Alto de Hazallanas, which is the first climb of the day. While the ascent amounts to 16.3 kilometres (at 5.5%) the last 7 kilometres are toughest. In this section the Hazallanas is averaging more than 10%, while the steepest ramps are 22%.

In the 2013 Vuelta Chris Horner climbed to victory atop Alto the Hazallanas, finishing 0’48” ahead of his main rival Vincenzo Nibali. Now it’s merely a passage. The riders plunge down a 20 kilometres drop to the valley before the Alto de Purche appears. This climb is a prerequisite is you want to get to today’s arrival place, just like the Col du Galibier and the Col du Télégraphe in the Alps are inextricably linked.

The first three riders on the line take time bonuses of 10, 6 and 4 seconds, while the intermediate sprint (at kilometre 45) comes with 3, 2 and 1 seconds. 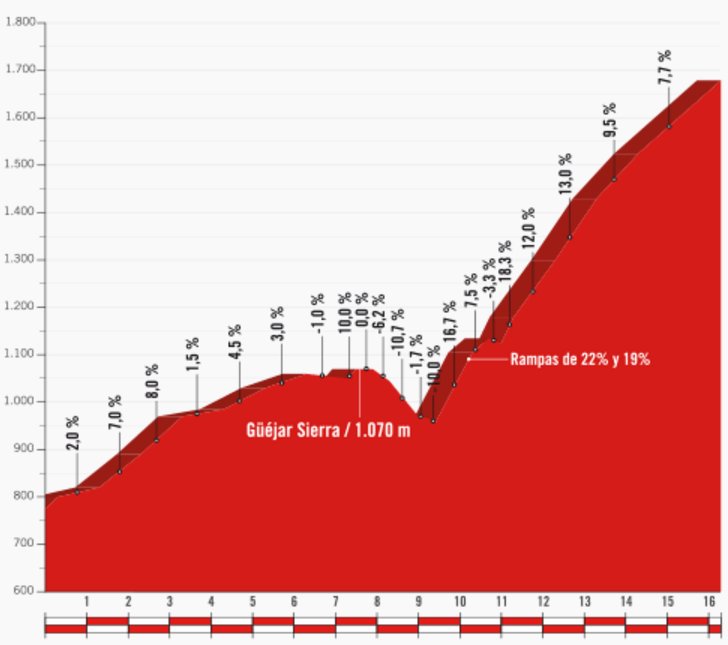