Sunday 14 April – Paris-Roubaix features 257 kilometres that include 29 cobbled sectors spread across 54.5 kilometres. The route is almost a copy of last year's edition, in which Peter Sagan powered to victory after a long range attack. He joined early attacker Silvan Dillier to outgun him on the Roubaix Velodrome.

Traditionally, the riders get underway in Compiègne and hit the first cobbles in Troisvilles just before the 100 kilometres mark. This sector has been shortened from 2.2 kilometres to 900 metres and the riders continue to the second stretch of pavé, which runs from Viesly to Briastre. They pass the monument that was erected in Michael Goolaerts’ memory, who tragically died after suffering a cardiac arrest in last year’s Paris-Roubaix. Furthermore, the sector has been renamed Secteur Michael Goolaerts.

Some minor changes in the subsequent sectors aside – such as riding these in the opposite direction compared to 2018 -, from Verchain-Maugré (sector no. 23) onward the route is exactly the same as previous year. Although the riders are now halfway through the race, the action is still to come.

As always, tension really starts to rise when approaching Trouée d’Arenberg. The straight and narrow road through the Forest of Arenberg lies at the heart of the Hell of the North. Last year, this year, next year… The 2,284 metres sector heads straight on through the woods and because it descends slightly in the first half speeds are high and crashes lurk. If you aspire to win Paris-Roubaix, you have no choice – you have to spend energy at the front at this point. Otherwise, you risk getting caught up behind or in crashes.

At kilometre 174.5, when hitting the pavé to Wandignies-Hamage, the race already is on fire. And on it goes. Tension further rises before Mons-en-Pévèle appears. Every cycling fan feels a rush when hearing this illustrious name. The combination of the length of 2,985 metres and the sorry state of the cobbles account for brutal hardship in the peloton.

On the iconic Carrefour de l’Arbre the finale is well underway. At 2,086 metres, this stretch of pavé is most feared for the cobble stones from hell and the sloped corners. After 1,200 metres a tricky left-hand bend leads to a slight ascent. If specialists want to strike on their beloved pavé, the Carrefour de l’Arbre is their last opportunity. At the end the riders turn right at Restaurant l’Arbre Gruson before they are treated with the heavenly feel of smooth asphalt almost all the way (15 kilometres) to the Velodrome in Roubaix.

Just two more harmless sectors, Gruson and Willems à Hem, lead the way to the last cobbled section, in Roubaix itself, which is a tribute to the race. The cobbles are neatly organised to avoid major discomfort. Riders go from here into the old Velodrome with one and a half laps to go. 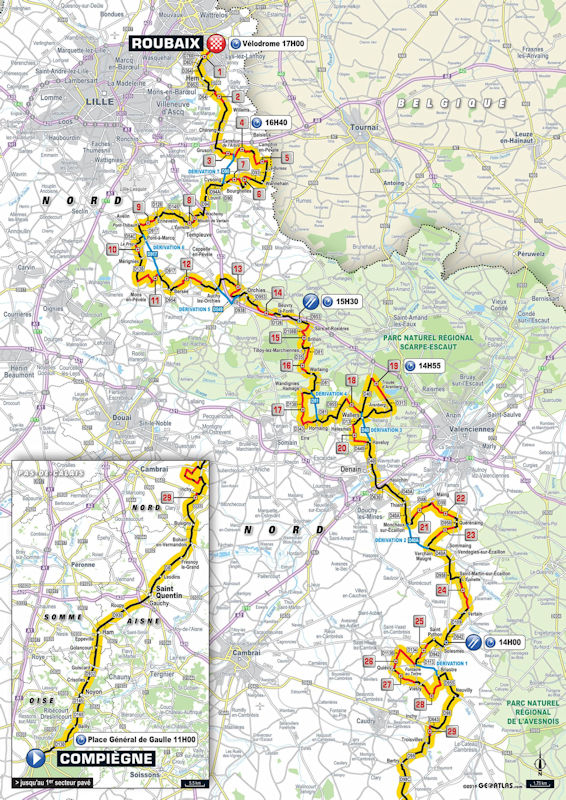