Saturday, 29 July 2017 - At 231 kilometres, the Clásica de San Sebastián is played out on a route through the steep hills of the Basque Country, Spain. The course takes in eight climbs with the steep Murgil Tontorra the last challenge. It's a 2.5 kilometers climb at 9% with a steepest ramp of 22%.

Last year, Purito Rodriguezm Alejandro Valverde, Tony Gallopin and Bauke Mollema were first to crest the Murgil Tontorra. The Dutchman attacked on the false flat on the top en he soloed to victory.

In 2017, the first climb is crested at kilometre 27.3. It’s the Meaga, a perfect warm-up climb, which is followed by the Alto Iturburu. At kilometre 60.5, the riders are atop the 7 kilometres climb at 5%, that’s crested with 59.5 kilometres done. Next up is the Alkiza, a 3rd category climb with the summit at kilometre 82.2.

With 17.3 kilometres done the Alto de Jaizkibel is crested for the first time. The 8 kilometres climb at 5.6% is a regular in the Clásica de San Sebastián and today it’s on the menu twice. The first 3 kilometres are steepest before the climb flattens out towards the top.

After almost 160 kilometres the riders tackle the Alto Arkale, another iconic Clásica de San Sebastián ascent. The Arkale is to be climbed twice, too. It’s a short uphill drag of 2.7 kilometres at 6.3%.

The riders plunge down to San Sebastian. With 16 kilometres to go they pass the finish line to power on to the steep ramps of Murgil’s climb. The Murgil Tontorra, as the Basks say, has a medium slope of 9%, while the distance is 2.5 kilometres. The steepest ramp of the last climb of the Clásica de San Sebastián is 22%. 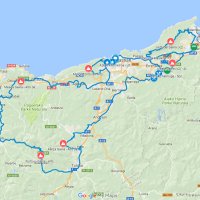