Saturday, 18 March 2017 - The 108th edition of Milan-San Remo is played out on familiar roads. At 291 kilometres, the first Monument is the longest one day race on the professional calendar.

La Primavera, the ‘spring classic’, marks the real start of Classics season – the race is the first Monument of the year. Often viewed as a sprinters Classic, the fastest man over the Poggio in the front group is likely to come out on top.

It is rarely so simple however with climbs like the Cipressa and Poggio providing opportunities for the punchy climbers, northern Classics strong men and break away specialists to try and escape the clutches of the sprinters. It’s very finely balanced and makes for compelling racing. The Cipressa and Poggio combo provides the main opportunity to attack and drop the sprinters before the finish line in San Remo.

The race opens with a long stretch on the Po Plain before the riders have to cross Passo del Turchino to reach the Mediterranean. A long and easy climb. The average gradient over 25 kilometres is just 1.4%.

After the Turchino the route is flat again for a long time. Then Capo Mele, Capo Cervo and Capo Berta are perfect to warm up for the final combo: Cipressa and Poggio.

What creates the most difficulty in Milan-San Remo is the sheer distance of 291 kilometres. After so long in the saddle, the finale is always exciting as the dynamics between those looking to escape and those looking to keep it together create a fast and frenetic ending.

First the Cipressa, 5.5 kilometres at 4.1% and a steepest section of 9% a little over halfway up. A great place for a break away as there are just over 20 kilometres remaining at the summit.

On to the famous Poggio. Last chance to escape the bunch with riders having varying degrees of success over the years. 2012 saw Fabian Cancellara, Simon Gerrans and Vincenzo Nibali succeed in breaking away from the decimated pack on the Poggio and the Australian proved best in the sprint.

The Poggio is just 3.7 kilometres long, but after almost 300 kilometres of racing it takes a huge effort for the bigger riders to get over at the front. It peaks at about 8% with 1 kilometre left to climb. The descent is spectacular with riders flying through the corners at high speeds. Good descenders could go on the attack and drop their rivals with their specialist skills.

The last kilometres are flat and perfect for any sprinter who is still in the mix. 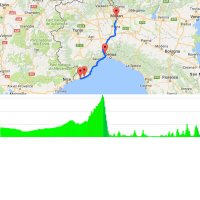 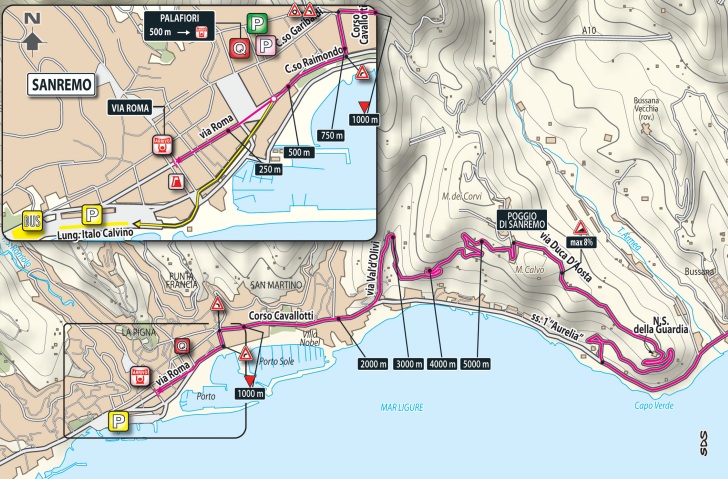