Wednesday, 24 May 2017 - The route of the 17th stage in the Giro d'Italia leads from Tirano to Canazei. At 219 kilometres, the stage travels over the Aprica before cresting the Passo Del Tonale, while the uphill stretch to the arrival place is a neverending story of 90 kilometres.

It’s only 2 kilometres into the race when the climb up to Aprica begins. The 12.3 kilometres ascent at 6.3% was also visited in stage 16 of the 2015 Giro d’Italia with Mikel Landa winning that day ahead of Steven Kruijswijk and Alberto Contador.

Following a short drop the Passo del Tonale is next. The climb totals 30 kilometres, yet it’s from Ponte di Legno onwards the going gets tough. In 11 kilometres at 5.7% the riders reach for the summit and… a great reward, as a 70 (!) kilometres drop takes to San Michele all’Adige.

After the long drop an even longer ascent marks the end of stage 17 in the Giro d’Italia. In 90 kilometres the route travels from an elevation of 210 metres to 1.442 metres. Obviously, no inhumanly steep ramps but such a long uphill section works on the system, that’s for sure. Good to know: the sheer endless false flat begins with the steepest bit, which is the Giovo – 8.1 kilometres at 5.7%.

Stage 17 ends in ski resort Canazei in the Fassa Valley.

The first three riders on the line take time bonuses of 10, 6 and 4 seconds, while the last intermediate sprint (at kilometre 178.9) comes with 3, 2 and 1 seconds. 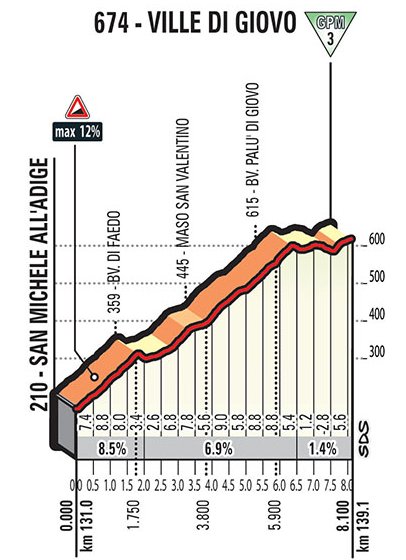 Start and finish at Google maps